She Was Terrified Her Entire Life 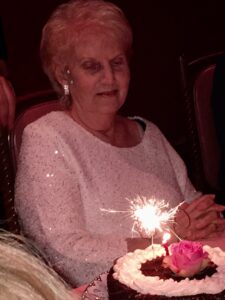 She was terrified her entire life.

And I mean terrified. My mom loved going out more than anything in the world. Yet on her last outing—dining in front of the water’s edge, followed by going for her beloved Carvel—because it had gotten dark on the way for her sundae, she wouldn’t look at her surroundings.

Me: (before I noticed what was going down): “OMG ma, I haven’t been over this way since I left home. I can’t believe your favorite restaurant is still here.”

My mother’s worst case death scenario was that she’d have a stroke and suffer out of control. And that’s exactly what she got. Long before that day, she’d placed her favorite child in charge of her destiny because, “He’s the only one who can make hard decisions.”

I called time. Essentially killed my mother. Like you do when you put a dog down. Me. Not her favorite kid. Me. The supposed chickenshit at heart. Me. A “lowly” woman.

That happened two years ago on December 16, ending at 7:10pm that night.

In the end, my mother was very brave. And that’s the legacy I cling to. Not the in-bred fear. Instead, the braveness she reached for and left as a gift to carry forward.

My mom and I had a tumultuous relationship. Thank the goddess for Reiko, my sister-healer: she taught me how to toss resentment and focus on the love. If not for Reiko, I don’t think I would’ve remained a loyal, dutiful daughter. And that would be a far worse regret than thinking that maybe I needlessly killed my mother.

Here’s to all of you who’ve lost loved ones, whether by death or abandonment. For creating a beautiful life, despite brokenness.

The Video: Surprising my mom for her 90th birthday. A mere 6 weeks before her daughter—my beautiful sister Jane—unexpectedly passed and turned our lives, especially my mom’s, inside out.