To Kill My Mother? 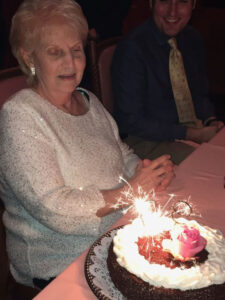 Today is three years since my mother died.
I had just arrived New Orleans five days prior to be with my son for a month, when I got the call about my mom. She had a stroke and was put on life support. Basically, her worst-case death scenario was playing out: Having a stroke and being put on a respirator totally out of control. It was gruesome. For her, and for those of us who had to watch her suffering. Years before, my mother had given my brother the responsibility of doing what was needed should she be unable to make decisions for herself.
The decision to call time fell to me.
I can’t bear to kill anything. The only thing I’d ever killed was our dog, which the vet guilted me into putting down, and a bird that I’d found on a walk one day with its eyes pecked out, gasping for breath, in total misery. For the bird, I placed a brick gently on its head and stepped on it. The popping sound of that still rings in my ears.
But to kill my mother?
Christ, that was hard. For months afterwards, I was in agony, questioning whether or not I’d made the right decision. Since I can’t write whenever I’m upset, I asked Funk to describe on paper the day my mom died. I haven’t read that piece since the first pass, and reading it today brought on a terrible melancholy.
Nice person that I am, I thought I’d bring you down with me!
So here it is, the text messages between me and Funk the day after my mom died—he had to leave for a consulting gig—and the piece that Funk wrote about my mother.
Texts between me and Funk, Tuesday, December 17th.
Funk: I’m on the plane. We’re delayed a bit. I love you. You are a very good woman and I admire you.
Me: I love you, white light yourself. I don’t know what’s to admire, but I’m glad you do. I admire you too. Thank you for knowing to stay yesterday.
Funk: Among the many things I admire about you is the poise and strength and compassion you brought to yesterday’s terrible situation. Far classier than any of the rest of us.
Funk’s piece he wrote for me.
The day your mother died.
There is no more difficult situation than the death of a loved one and most people have no idea how to react. They say things like “I don’t know what to say” because it is quite literally true. And often they are merely silent, offering no words at all.
When your mother was dying you knew exactly what to say – to the doctors, nurses and medical staff, to your brothers and to Jenny and Heather, and, most of all, to your mother. You stood by her side for hours, talking to her, reassuring her, stroking her head and holding her hand. You were constantly fiddling with her covers and bedding and the robe and nightgown you brought her in ways that sought to make her more comfortable, but even more important, communicated silently to her that you were caring for her.
You were demanding of the doctors and medical staff when you needed to be and when it was appropriate. But you also listened respectfully and worked with them when that was the right thing to do. You were essentially the leader of a whole group of us concerned with and working to try to make the best of the terrible situation with your mother. You consulted people and then made tough decisions. And you did all this in a way that increased their respect for you. Essentially, you won people like the head nurse and Nathan, the respiratory therapist, over to your side in a way that I believe rarely happens.
You showed strength – you were literally on your feet for about 12 hours, never leaving your mother’s side and attending to her and others the whole time. You showed compassion – for your mother, despite the difficult relationship you had with her, and for your brother San and even for Steve, although he essentially rejected it. You could justifiably have been petty, vindictive and demanding and yet you were none of those things. And you showed poise – despite the enormous pressure, you never really lost control of yourself, nor did you let overwhelming emotion get you to make a bad decision or treat someone callously. And finally, you were classy – your personal behavior was skillful, kind and graceful, despite everything.
So. that’s it. The events of the day my mother died, as described by Funk. I never see myself in the good light that he does, so his description helps me think better of myself.
The photo: My mom on her 90th birthday. Before she died, I’d ushered many babies into this world, but I’d never ushered someone out. But I can tell you one thing, the beauty is the same.